His TV shows have seen him tackle everything from a Mini Cooper to a Dodge Charger but Wheeler Dealers’ host Mike Brewer has always had a special affection for MG and in particular, the MGA.

“Of all the cars MG have ever built, the MGA is for me, the best. Now don’t get me wrong – I can see the appeal in a Triple M, I know the MGB tends to be people’s go-to MG and I’ve enjoyed a ZR 160 or two in my time, but for me, the MGA is the one” says Mike. “With the MGA it’s got such a great story with it – from the legendary EX cars that entered into Le Mans, the twin-cam, even Elvis owned one – there’s something really special about the A.”

“Those gorgeous lines that Syd Enever sketched all those years ago just seem to get better and better every year – from the moment we sold the MGA on Wheeler Dealers I’ve wanted to do another one.” 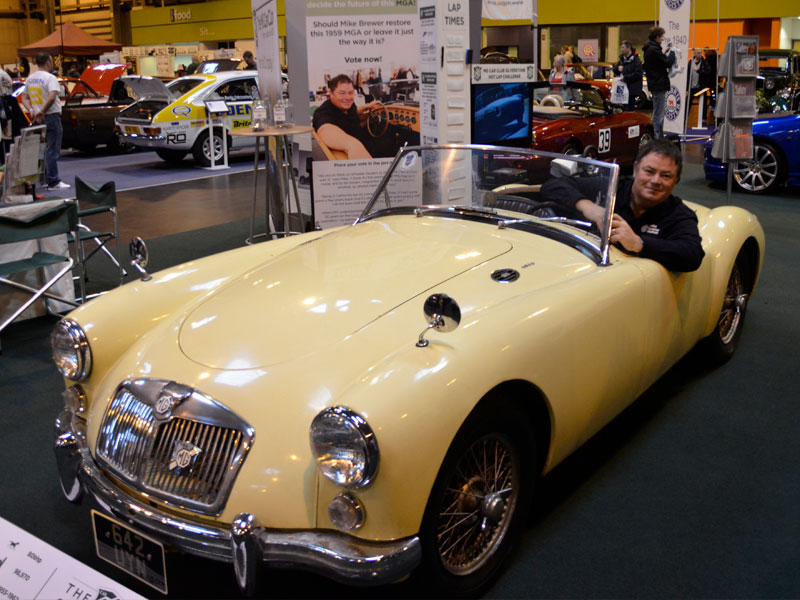 The story so far…

Mike joined the MG Car Club in 2015, after hosting at MGLive! “I had a great time at MGLive! and people loved seeing the MGA we’d done on TV at the show, so this time I wanted to do it for myself and share the project with other members of the Club and in the kind of depth that an hour on the telly just won’t allow.”

While the idea of doing an MG project was something Mike was interested in, he didn’t go out looking for something to restore. “I found the car in California – it was rough but solid thanks to the climate – and at some point, had been resprayed in yellow. I was so pleased to have another A and was quite happy to keep it just the way it was and so shipped it back to England. It was whilst reading Safety Fast! I saw some of the MGAs in there and started to think about getting members of the Club to give me their opinion on it – restore it, or leave it as it is.”

The A featured on the Club’s stand at the Classic Motor Show that November, with Mike asking show-goers to vote whether to restore the car, or keep it ‘as found’ “I knew there’d be people out there that wanted it kept as it was” says Mike “I met plenty of them at the show, but once they saw that the car wasn’t original, that changed a lot of people’s minds.”

After the show, Mike brought the car to Kimber House, putting it on display in the John Thornley Suite. “Bringing it back to Abingdon was pretty special” he says. “Even more so when you think that the Club’s HQ is so close to the old factory site – it really was like bringing her home!”

Once the votes were totted up, over 60% of people had gone with restoring the car and so Mike began to look for the right partners to work on the project. “The A is a bit special because unlike say the MGB or Midget, not everything is available off the shelf and there has to be a budget for the project. I spoke with the guys at Kimber House and some other friends who’ve restored their MGs and the name that people kept coming back with was Moss Europe, so they seemed to be the people to speak to and were interested in getting involved with the project so it tied up nicely.”

With a parts supplier sorted, Mike turned his attention to someone to help him rebuild the car. “With my commitments to filming, there’s no way I can do this one in my lock-up at home and we didn’t want to do one on the show as we’d already done an A” recalls Mike.

So how did RPS get involved?

An entry on the 2016 Peking to Paris rally had brought Mike in touch with Rally Preparation Services and although work commitments meant he hadn’t been able to enter the rally, he’d struck up a friendship with the guys – in particular MD Simon Ayris and classic car technician Ben Harris. “Ben’s a big MG man – he’s been around MGs for years, he’s built more than a dozen different MGs, and plenty of them have been MGAs.”

Mike got in touch and as he expected, Ben and the rest of the guys at RPS were up for the challenge and Ben went to assess the car at the Club’s Kimber House headquarters.

Ben was happy that Mike had bought a decent basis and it would be ideal to kick things off by starting the project officially at MGLive! 2017.

“We got the car to MGLive! and the guys just went for it” says Mike. “As more and more of the car came apart, we started to realise just how solid it was. That’s obviously the biggest benefit to a Californian car!”

Once MGLive! was over with, the A travelled back to the RPS workshop, leaving Mike to get to London, and Moss’ HQ to secure everything on Ben’s shopping list.

“We had a great day at Moss – I didn’t realise how massive the operation is – they’ve got everything there from a gear knob to a full bodyshell, it’s incredible.”

At long last Mike had everything in place for the MGA project and the restoration began.

“I’m keen to make sure the car’s in keeping with what MG intended for it back in 1959, but I also want to see what can be done take in some of the improvements that have been made to the B-Series engine over the past 60 years” he adds.

“We’re going to go through every step of the resto – bodywork, engine, running gear, interior, everything. It’s a great opportunity to see what goes into a restoration” says Mike. “Not only that, the mechanicals, the oily bits we all love – so much of that will apply to other cars, so there’s loads that I hope will be of interest to fellow enthusiasts.” 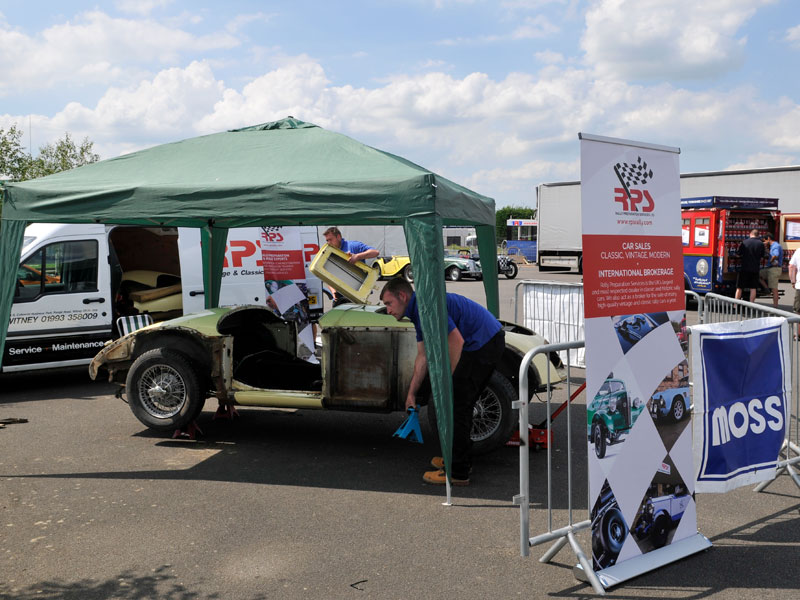 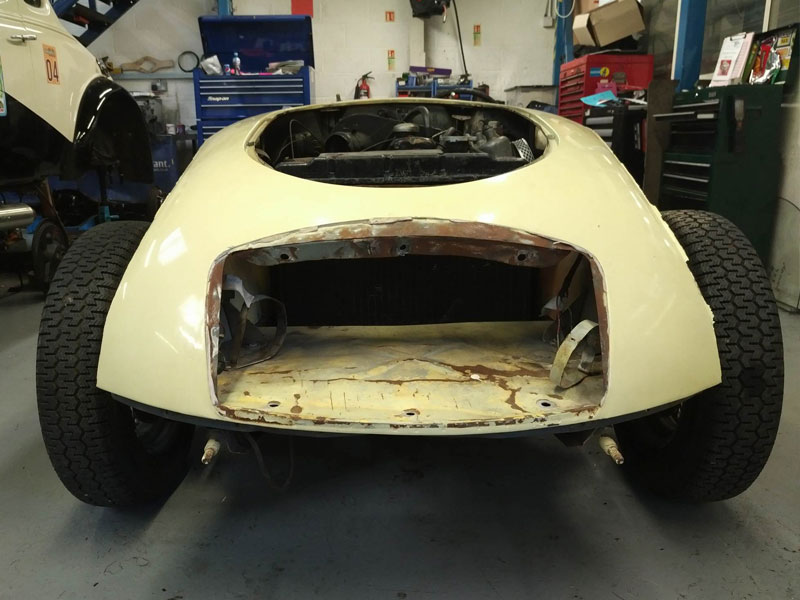 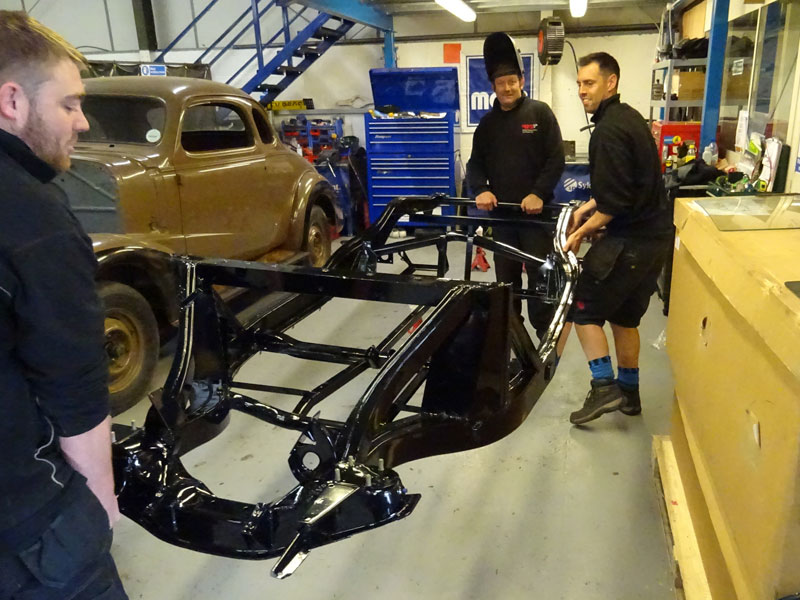 READ ARTICLES ON THE MGA PROJECT

As the end of the event approaches we have asked the team to get some information through before the night leg begins as we know it is going to be quite a long day for them.

To get the rally back down to Monaco via the three elements of today’s competition in the Cols the crews had a much earlier and much colder start from Valence today.

Ice notes coming back from the ice crew are very much so more favourable today as the crew heads south on the way to Monaco and the warmth of the Mediterranean!

The service crew of Steve Bunce and Rob Kitchen were hoping to keep their tally of reaching all service points again today, a difficult task with the way that the route takes the rally up and over the many Cols…. a big well done to them so far!

On this rally sitting alongside Rob and navigating, Steve has learnt quite quickly the art of getting along effectively in a 3 ton truck. Especially with it loaded with the many variations of tyres needed, fuel, spares, tools and Simon’s many luggage bags!

The #TeamRPS Golf GTi continues to impress with its performance, handling and robustness, all credit to the many hours of preparation in the RPS workshop… the only problem reported today was that Lewis dropped his freshly made ham and truffle baguette under his seat on a link section. Not the first time apparently…

The first regularitie St Nazaire le Desert to La Motte Chalancon was a blast, 20km of flowing corners and no black ice to worry about.

Next up SR 13 was full of left and right turns along with many hairpins making the test extremely technical.

One more competitive section this afternoon before the guys make their run into Monaco.

I can vouch for Lewis' form with sandwiches, nice to know he's consistent!

Great stuff, what an adventure!

The team has reported back that today was a very difficult day.

First two regularities were very icey so service was arranged for the tyres to be changed over to studs just before the first competitive section.

The first test was 15km long and mostly black ice with some snow so #TeamRPS had to keep the focus with the car squirming and sliding across Col de Carabes up at 1260 metres.

Straight into the next test 23km down the road and the pair were once more faced with ice and snow on SR9 from Les Savoyons to Barcillonette. But with Lewis at the helm he successfully kept the car under control.

Things got even more technical on the following SR, with a 40km test again with ice and included two speed changes, penalties are high for getting these wrong so we are all eager to see the outcome…

The guys lost a chunk of time across the morning so they had been desperately trying to stay on time meaning they had to forgo the allotted service before the lunch control. Lunch was served by Charly and Angelo from the team’s logistics,it’s been reported that the Bratwurst and Espresso’s were brilliant and almost Michelin 5 star quality!

The afternoon was a mixture of sunshine, dry roads and speed changes again on two more tough regularities… All of them successfully managed and the car made it safe in Parc Ferme at the end of the day.

Simon said he’d enjoyed the day, everything had worked perfectly and how proud he was of Lewis’ ability behind the wheel so far through all of the many changing conditions each day.

After a last team dinner an early morning awaits – next stop… Monaco before the infamous night leg!

What a team. More success please.

Departing from Valence this morning the guys headed to SR4. There were villages to contend with in which you cannot go over 30 kph meaning you are constantly losing time until you exit the village. With 2km to catch up the lost time there was some quick driving on Lewis’ part, despite there being no ice they still managed to slide sideways narrowly avoiding a brick wall!

Back down onto the road section and the studded tyres needed to be fitted for SR5 & SR6. Once more the RPS service crew sprung into action getting the Golf prepped and ready to go.

SR5 included an average speed change while passing through a village which proved difficult for some crews, but not for Simon as he nailed it!

SR6 was the first time encountering a proper sprinkling of snow, much nicer to drive on than the sheet ice from before. A few slips and slides but they kept out of trouble and got to the end with the car in one piece!

A quick pit stop was made in Lamastre to remove the studded tyres before heading over for SR7 to end the day.

From SR7 the crew needed to head down to the time control in Tournon-sur-Rhône but the traffic was slow going and after much anxious waiting they managed to book in 2 minutes late.

In all the panicking at Tournon-sur-Rhône a miscalculation on their final time to check into the control in Valence unfortunately meant some penalty points were incurred. Not enough to end the rally though!

Tomorrow they will start by tackling SR8 which is being reported back as quite a challenge! But we are sure the guys will continue to smash it!

TALK TO ONE OF OUR EXPERIENCED RALLY PREPARATION TEAM SPECIALISTS

GET IN TOUCH
Go to Top