Day 2 of the Tin Cup Trial and Sunday morning started with a fantastic route taking the cars away from Bailbrook House in Bath and into the surrounding countryside. They were heading to Kemble Airfield but first there was a quick blast on a secluded solar farm with a lively test to make sure no one was caught having a lie-in.

A slalom of cones tested the manoeuvrability of the car and the reflexes of the drivers as they sprinted down the course of the first of four of today’s Tin Cup Trial tests. Fast and furious, tyres screeched and only one cone was sacrificed under the wheel of Andrew and Shirley Laing’s Alfa Romeo AlfaSud. 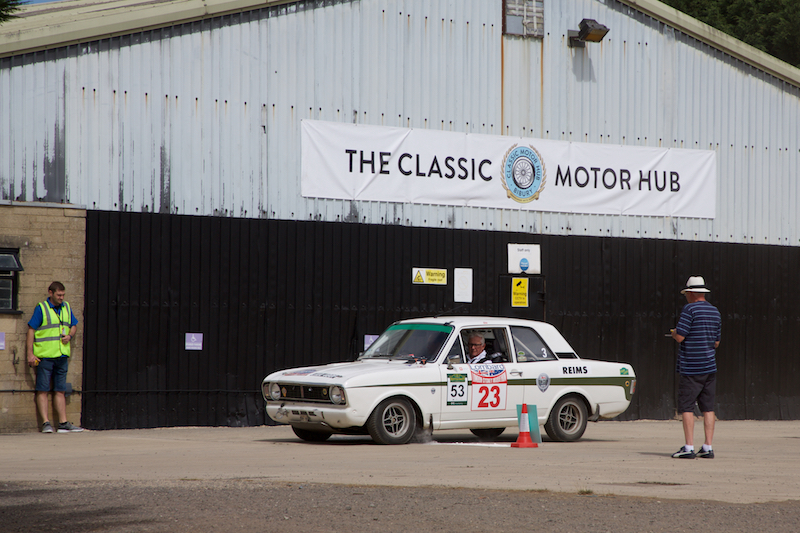 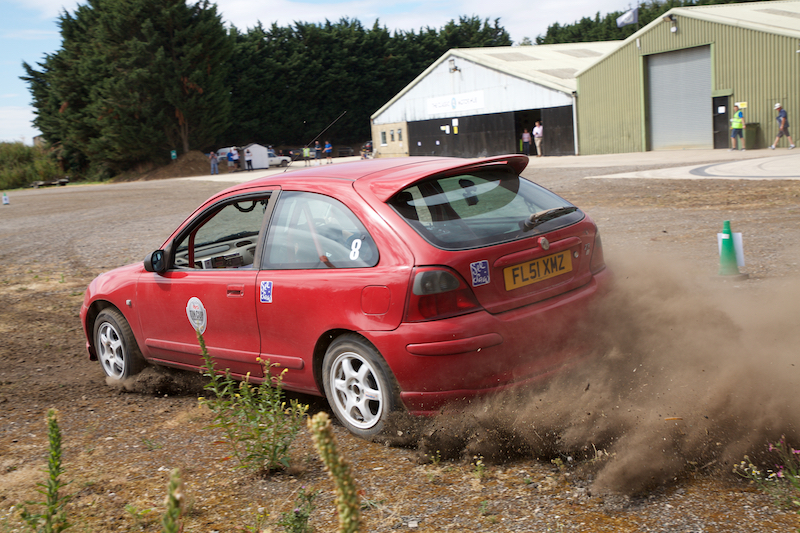 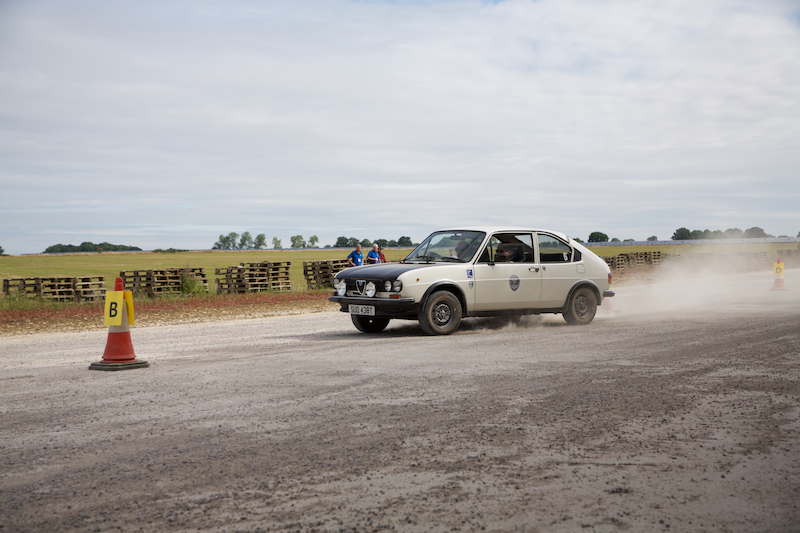 It was then on to Cotswold Airport and the Kemble Airfield where crews got the chance to see how the opposition were doing as they watched each car take on the circuit under the watchful eye of the marshals.

Our run for the finish continued into the Cotswolds, winding through the lanes and villages. A ford situated in the middle of a group of farm buildings had filled with the overnight rain so it was a good job Julian and Karen Griffiths had been awarded a pair of rubber rings after a ‘belly flop’ into yesterday’s water. Wearing them around their necks, their Hillman Hunter made a splash through the Ford without needing a life guard.

The crews headed deeper into the Cotswolds and to the village of Bibury where they discovered the hidden gem of the Classic Motor Hub. With hangers filled with rare Bugattis, Bentleys and a stunning Citroen DS two-door coupe that brought tears to many an appreciative eye, the crews had a quick circuit to do in the shadow of the hanger either side of a leisurely lunch allowing them time to appreciate the cars on display. For some, lunch proved to be expensive…

With full hearts and stomachs, the competitors gathered to watch each crew take on the test with #TeamRPS member Lewis Ayris and navigator Jane Elliott from SeeSaw producing the fastest time across the two sessions.

From there, the competitors could almost taste the finish line or were at least dreaming of the cold beer that would follow but one test still remained – the RPS target. Crews made their way to the RPS HQ in Witney where the yard had been transformed into a ‘nearest the target’ manoeuvrability test. Rudy Hug and Piere Gerber hit the mark perfectly in their Lotus Cortina.

The sun shone on the finish at Eynsham Hall where Simon Ayris and his team waited to welcome the crews with the chequered flag. Once the flag dropped and the winners sprayed the champagne, there was a hearty dinner and the prize giving. 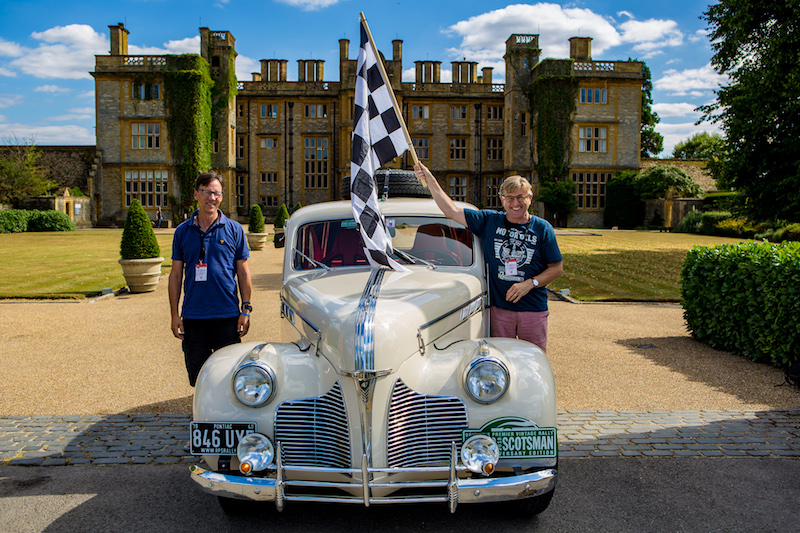 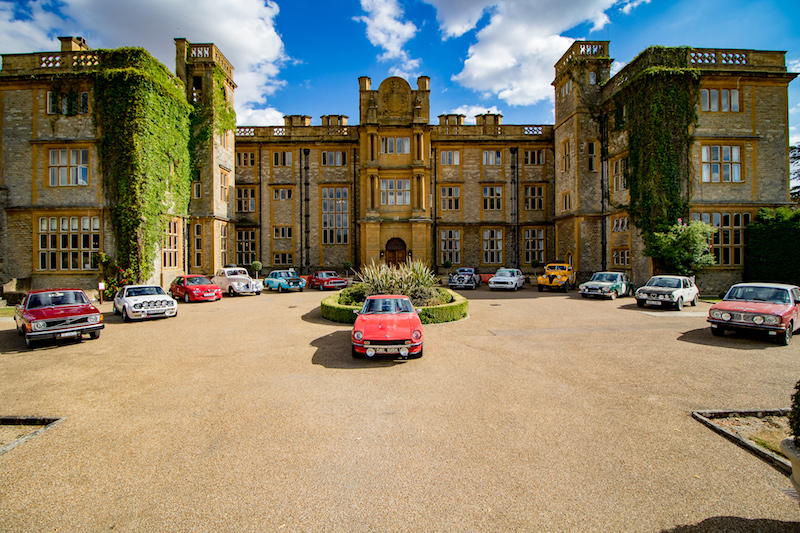 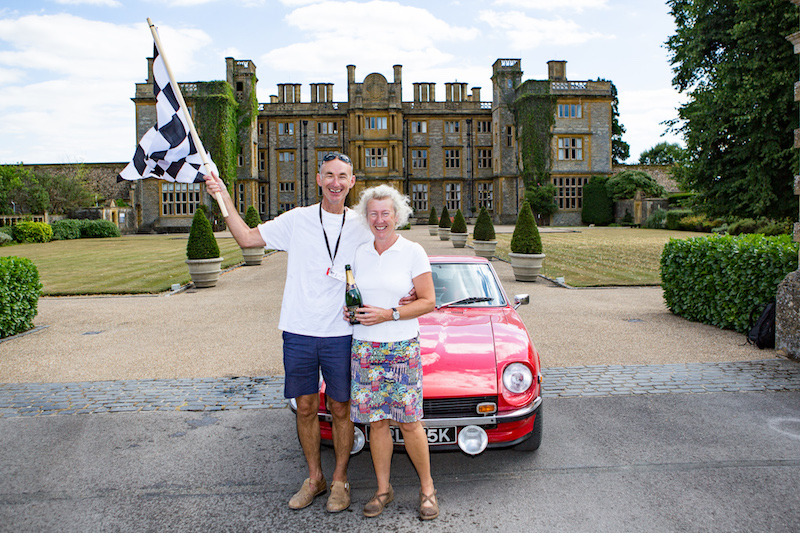 The Vintageant winners were Keith Weed and Richard Holmes in the Pontiac while the Classic winners were David and Alison Ring in the Datsun 240z. Special awards were also presented, with George and Margo Coelho winning the Concours d’Elegance in their unassuming 1974 Volvo 144DL; Franco Lupi and Eric Warren in the 1979 Porsche 924 Turbo were presented with the Spirit of the Rally award. Franco was one of the first people to grab Simon at the dinner and say, “if you do another one, no, when you do another one we will be there!”

Rudy Hug and Piere Gerber picked up the RPS Target award, a silver Spitfire to represent the previous modes of transport built on the RPS site.

Presenting Simon with a traditional Swiss brass cow bell from his ‘Swiss Friends’, Rudy exclaimed that RPS did indeed stand for ‘Really Professional Services’ and thanked the team for a fantastic weekend.

Winner Keith Weed said it was ‘the most fun I’ve ever had with my clothes on’, while George Coehlo deemed ‘Salisbury Plains and Worthy Farm exercises were two of the best driving experiences we’d ever had, the event pulled together the right blend of competition, sport and camaraderie.’

Local councillor and long-term rallying couple Alec and Jane Postan said that they enjoyed being part of the RPS family and hailed the event a ‘Resounding Professional Success.’

Alvis driver Alec Hammond said: “What an excellent weekend, great fun and very slickly organised, Team Hammond and Team Beighton struggled to leave Eynsham Hall this morning, don’t know if it was a hangover or just didn’t want the event to end, perhaps a chunk of both!”

Jane Elliott, who was riding shotgun with Lewis Ayris in the RPS SeeSaw car, had been raising awareness and funds for the RPS Charity – SeeSaw. Jane said: “An absolutely fantastic event. Brilliantly organised – huge congratulations to everyone who was involved and thank you from the bottom of my heart for inviting me to join you. It was superb fun – Lewis was an awesome driver – I was possibly the worst navigator on the planet (sorry Lewis!). So far, the fundraising total for SeeSaw stands at £1770.50 plus some further Gift Aid to add on! What an epic result all round.”

Classic category winners David and Alison Ring added: “We had a superb time, the attention to detail was brilliant and all of the event ran smoothly and effortlessly but above all the willingness and helpfulness of everybody running the event stood out.”

MD Simon Ayris and all the team at RPS would like to thank all the marshals and volunteers that helped make the various tests such a huge success – thanks to Chief Marshal Dick Hall, Craven Motor Club, Bath Motor Club, and Salisbury and Shaftesbury Car Club.

Thanks also to Englefield Estate, Bailbrook House, Classic Motor Hub, and Eynsham Hall for your hospitality, as well as Rally Round for sponsoring the coffee halt at Crofton Beam Engines, and Frome Showground, Worthy Farm, and Kemble Airfield for making the tests possible.