Driving a stunning BMW 327/28 Sport Coupe prepared by Rally Preparation Services, the German and British team of Gerd Buehler and James Ewing topped their class at the end of another successful RAC 1000 Mile Trial.

Entered in Class 4, the crew not only took class honours after overcoming a challenge from tough opposition that included a number of Frazer-Nash BMW 328s and an AC 16/80 March Special, but also finished fourth overall in HERO Events’ award winning 1000 Mile Trial rally.

This impressive double result for Buehler and Ewing came at the end of six days of gruelling driving tests and regularities, and a journey that took competitors from Surrey to Hertfordshire. In fact, the pairing had led their class for most of the event and had risen as high as third overall by the end of Day 5. 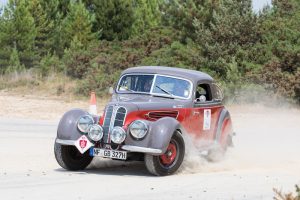 Taking place from 8-13 July, the 2018 Royal Automobile Club 1000 Mile Trial was for cars manufactured before 31 December 1939 and attracted an impressive entry list from across Europe, not to mention America with the crew of Richard and Noel Schneider competing in their delightful 1937 Riley 15/6. Cars from the likes of Bentley, MG, Alvis, and Jaguar were popular entries with competition tougher than ever, but this year’s Trial also featured a revised format. While the competitive driving tests and regularities remained at the core of the event, 2018 also allowed participants more time for socialising and soaking up the atmosphere of the terrific locations.

The first leg of the Trial saw the cars and their crews depart from the beautiful countryside location of Woodcote Park, the Surrey home of the Royal Automobile Club located just a short distance from the famous Epsom Downs racecourse. The destination was the Berkshire town of Reading, with the following day seeing the drivers heading for Bristol.

Three tests at the Castle Combe racing circuit featured during the leg that later took drivers into mid-Wales where superb roads and scenery awaited during a clockwise loop that would see them face plenty of challenging terrain, not least of which was the Abergwesyn Pass, otherwise known as the ‘Devil’s Staircase’.

This year’s Trial then carried on towards Birmingham before the final day saw the remaining competitors reach the finishing line at Chandlers Cross in Hertfordshire. The overall winners were the Class 4 entry of Peter Lovett and Matt Fowle in their 1937 Frazer-Nash BMW 328.

It had been another successful event for Buehler, Ewing, and Rally Preparation Services, and we are looking forward to another great result on next year’s 1000 Mile Trial which is scheduled for 9-13 June 2019.